Company 14 was dispatched 0505 hrs to the 300 block of Hangers Mill Rd. on the morning of February 16th, 2014. Churchville Volunteer Fire Department, Staunton City Fire Department also responded on the initial dispatch. Engine 47 reported heavy smoke in the area and made it a "Working Incident" (By doing this it adds an additional Engine and a Duty Officer to the incident) and also activated the Tanker Strike Team for that area. With those two requests, Augusta County Fire/Rescue, Verona Volunteer Fire Department, Mt. Solon Volunteer Fire Department, and Weyers Cave Volunteer Fire Company were added to the assignment for an Engine and Tankers. Command marked on location with a barn heavily involved and crews went to work containing and suppressing the fire. Crews were not only hindered by a lack of hydrants in the area but also by an unplowed driveway to the structure. The barn, some livestock, and a tractor were lost in the fire. Units on scene were E-47, E-2, E-145, T-45, T-147, T-65, T-215, T-50, UT14, B-148, B-42, Rsp-6, E-102, and Medic 50 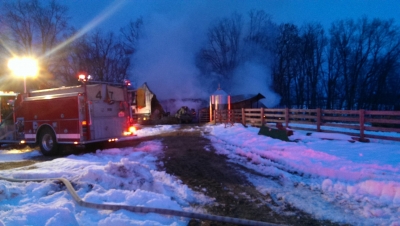 Copyright © 2006-2021. YourFirstDue Inc. All Rights Reserved. Designated trademarks and brands are the property of their respective owners. Content on this web site is supplied by Swoope Volunteer Fire Company. YourFirstDue Inc. cannot be held responsible or liable for any content, text, pictures, or any other media found on this web site. Maintained by the members and staff of Swoope Volunteer Fire Company.
Management Login
Powered by