It is with great sadness that we have to announce the passing of former Chief and Life Member, Tom Shipe. Tom was a huge supporter of Swoope Volunteer Fire Company during and after his active time with us. He will be greatly missed. Please keep his family in your thoughts and prayers.

Swoope - Tommy Lee "Tom" Shipe, 60, of Swoope, passed away on Friday, April 5, 2019 at Augusta Health in Fishersville surrounded by family, friends, and love.

Tom was born August 18, 1958 in Staunton. Tom was a kind and generous man who spent his life working hard to provide for his family and serving his community as a volunteer firefighter. When he was not working, or spending time with his family, you could usually find him in the woods pursuing his greatest hobby, hunting. He never met a dog that he did not immediately love, and it was not uncommon to arrive home to a new pet. Tom loved children, and he was an honorary grandfather or father figure to many in the community.

Tom was preceded in death by his father, Thomas Eugene Shipe.

Tom was a devoted husband, father, grandfather, son, brother, and uncle. He is survived by his wife, Teresa Shipe, of Swoope; his son, Jonathan Shipe and his husband Charles Warner, of Lynchburg; his daughter Jessica Losnes, her husband Daniel, and their two sons Mason and Lucas, of Forest. He is also survived by his mother, Dora Jean Shipe, of Waynesboro; sister, Debbie Breeden and her fiancé Jake Alexander, of Fork Union; brother, Bobby Shipe and his wife Janette, of Staunton; brother, Jamie Shipe, of Greenville; and sister, Mary Almarode, of Crimora. Tom had numerous nieces and nephews who he also loved. He is also survived by his mother-in-law, Margaret, and her husband Mark Lehman, of Harrisonburg.

The family will host a memorial service on Saturday, April 13 at 11:00 am with family visitation starting at 10:00 am in the Coffman Funeral Home Chapel.

Coffman Funeral Home and Crematory, 230 Frontier Drive, Staunton, is in charge of his arrangements.

Knox Box for Residential Use 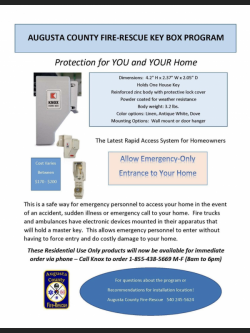 Home Knox Box Program - Rapid "Emergency-Only" Access System for Homeowners!  Knox Boxes are secure locking boxes for a key that allows Emergency-Only entrance without damage to your home when you call 911 but can not come to unlock the door.  (Example: you have fallen and can not get to the door). The cost for these units are VERY reasonable... $170-$200 for most applications!Residential Use Only - Call Knox Box Corporation to order yours today 1-855-438-5669.  Swoope V... 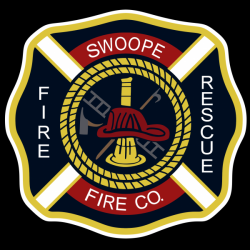 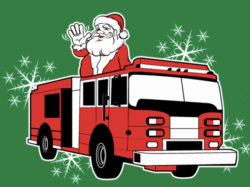 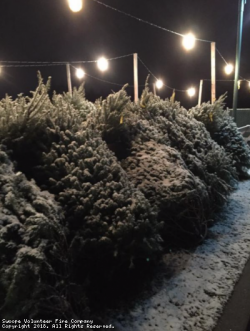 FRESH CUT CHRISTMAS TREES!!! Come out to the Swoope Volunteer Fire Company on weekdays from 5-9pm or on the weekends from 9am-9pm to get your freshly cut White Pine Christmas Tree. LOW LOW PRICE of $25 and help support your 100% VOLUNTEER Fire Company! Merry Christmas and Happy Holidays!!!

On September 10, the Swoope Volunteer Fire Company (SVFC) hosted a Strategic Highway Research Program, 2nd Edition (SHRP2) and Traffic Incident Management (TIM) courses at the station. These classes were taught by Virginia Department of Transportation (VDOT), Virginia State Police (VSP), and Fire Instructors. SVFC opened courses up to neighboring companies and first responders. Although long recommended, the locality, Augusta County, has recently made this training mandated for any first re...

Read more »
The Newest Member of the Swoope Family

A BIG congratulations to Daniel and Candace on the birth of their little girl, Brooklyn Nicole Bell who was born September 4th at 11:58 hours.  Mom and baby are doing well.

On August 30, 2019 at 00:21 hours, Swoope Volunteer Fire Company responded and assisted Mt. Solon Fire with a Structure Fire, a fully involved (large) garage.  Engine 14-5, Tanker 14, Chase 14 and REHAB 1 all responded to incident and remained on scene for several hours until situation was placed under control. Other responding units include: Augusta County Fire & Rescue, and Churchville Fire. 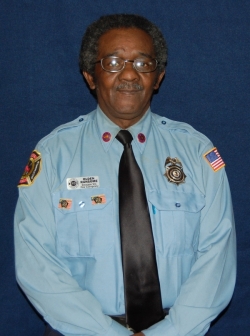 The officers and members of the Swoope Volunteer Fire Company are saddened to announce the passing of our Brother Firefighter Olden “Nate” Ransome, early this morning. Nate was a Life Member and a past Fire Line Officer that dedicated countless hours of his life helping those in need.  You will be missed my friend... rest easy .

Our Thoughts and Prayers are with Churchville Fire & Rescue 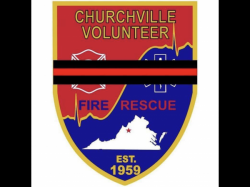 The Officers and Members of Swoope Volunteer Fire Company send our thoughts and prayers to our neighbor, Churchville Fire & Rescue while they mourn the tragic loss of one of their own.

The Newest Member of the Swoope Family 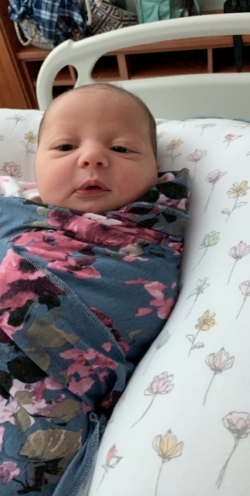 We are very pleased to announce the newest member of the Swoope Family...Arabella Mae Folweiler, born yesterday, 8 lbs 20 inches, August 6, 2019 at 23:38 hours. Mommy, daddy and baby are all doing great. 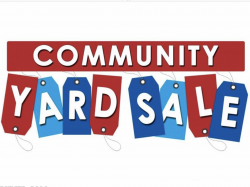 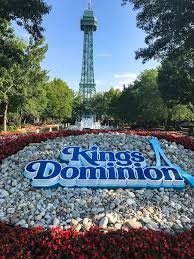 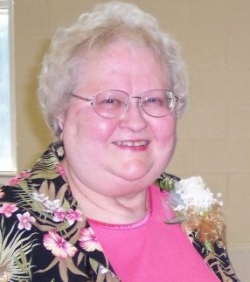 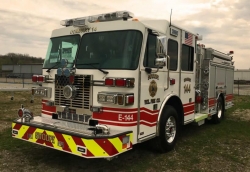 The Officers and Members of the Swoope Volunteer Fire Company would like to announce that our brand new Fire Engine 14-4 has arrived at Swoope. It will soon replace our 1984 CF Mack Engine 14-2, and be placed in service.

The Officers and Members of Swoope Volunteer Fire Compny would like to say “Happy Birthday” to Fire Chief Kevin L. Wilkes. Thank you for all of your leadership, friendship, and mentorship, we couldn’t do it without you!

It is with great sadness that we have to announce the passing of former Chief and Life Member, Tom Shipe. Tom was a huge supporter of Swoope Volunteer Fire Company during and after his active time with us. He will be greatly missed. Please keep his family in your thoughts and prayers.Swoope - Tommy Lee "Tom" Shipe, 60, of Swoope, passed away on Friday, April 5, 2019 at Augusta Health in Fishersville surrounded by family, friends, and love. Tom was born August 18, 1958 in Staunton....

The Swoope Volunteer Fire Company would like to share the Harrisonburg Fire Departments fire safety tips for your home;  if you are a smoker, please make sure that your smoking materials are extinguished completely,  never leave an unattended candle burning,  always have an escape plan prepared,  have a working fire extinguisher in the house,  and most importantly ensure your smoke detectors are working.  The simple tips can save your life. https://www.whs...

The Swoope Volunteer Fire Company would like residence to be aware of the Burn Law that is in effect from February 15 to April 30.

Automobile Accident - Vehicle Over the Embankment with Entrapment

On March 24, 2019 at 00:28 hours, the Swoope Volunteer Fire Company along with Churchville Rescue Squad were dispatched to a report of an Automobile Accident at the intersections of Galena Road and Churchville Avenue.  Responding units; Engine 14-5, Chase 14, Response 14 and SARS Rescue 5 searched the area to find no evidence of an automobile accident. After about 8 minutes of searching, Engine 14-5 advised Emergency Communications Center (ECC) this incident was unfounded. &n...

On March 11, 2019, the Commission on Professional Credentialing (CPC) met and voted unanimously to award Chief Fire Officer (CFO) designation to Scott F. Wilkes. The Center for Public Safety Excellence (CPSE) awards CFO to members who have demonstrated through education, leadership and management skills that possess the requisite knowledge, skills, and abilities required for the fire and emergency services profession. This is a big milestone in Scott's career and the Swoope Vo...

Copyright © 2006-2020. YourFirstDue Inc. All Rights Reserved. Designated trademarks and brands are the property of their respective owners. Content on this web site is supplied by Swoope Volunteer Fire Company. YourFirstDue Inc. cannot be held responsible or liable for any content, text, pictures, or any other media found on this web site. Maintained by the members and staff of Swoope Volunteer Fire Company.
Management Login
Powered by