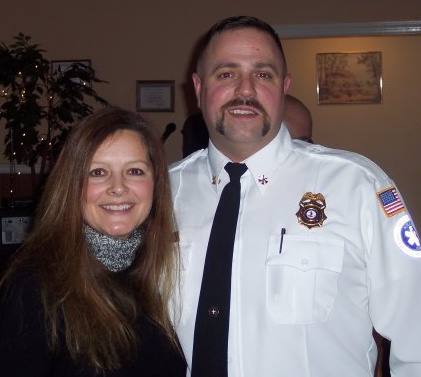 It wasn't long before Wilkes rose to the rank of Fire Captain with the third busiest fire company in the state. Wilkes was presented with numerous awards and decorations top 10 responder every year, Unit Citation for CPR save, Unit Citation for MVC, and the Green Cross for heroism. Wilkes remains a member of the Mill Creek Fire Company where he spearheads an exchange program, escorting members of the Swoope Volunteer Fire Company and surrounding fire companies to Delaware to ride-a-long with the busy Delaware Company. In return several members of Mill Creek Fire Company have made to long journey to Swoope Volunteer Fire Company where they participate in a ride-a-long program with Swoope.

Wilkes moved to the Staunton area in 2004, where he was employed by the City of Staunton Fire Department. At that time the Swoope Volunteer Fire Company had a roster of approximately 12-14 members. Then one early morning on his way home, Wilkes stopped to offer assistance at a motor vehicle collision scene. The President of Swoope Volunteer Fire Company who was on scene, just happened to pull out an application for Swoope, Wilkes was recruited right then and there at 0130 in the morning on the side of the road.

Once again, it didn't take Wilkes long to expose his leadership skills, experience and knowledge. Soon after joining Swoope, Wilkes found himself asked to fill an open Lieutenant's position. The following year, Wilkes was elected Captain of the fire company. This is where Wilkes really rolled his sleeves up and got to work. In 2009, Wilkes acquired a Chevrolet Suburban from our friends at the Mill Creek Fire Company, to be put in service at Swoope's first emergency medical services response vehicle.

This site has been viewed 128,715 times.
Calls
News
Events
Pictures
Apparatus
Maintained by the members and staff of Swoope Volunteer Fire Company. Designated trademarks and brands are the property of their respective owners. Copyright © 2006-2022. YourFirstDue Inc. All Rights Reserved. Content on this web site is supplied by Swoope Volunteer Fire Company. YourFirstDue Inc. cannot be held responsible or liable for any content, text, pictures, or any other media found on this web site.
Management login
Powered by